On this day trip from Marrakech you come to Visit Ouarzazate and Ait benhaddou Kasbah, these magical places; the Gate to the Sahara desert.Located  just four hours from Marrakech. the one day tour to Ouarzazate and its legendary kasbahs, known for its spectacular sunsets and amazing mountain and desert sceneries. But also  its breathtaking valleys. Ouarzazate was once the crossing point for African traders seeking to reach northern cities in Morocco and Europe. During the last decades, Ouarzazate expanded considerably as a garrison town and became the capital city for cinema in Morocco and in whole africa Three hours drive takes you to the gateway of Sahara, traversing the Tichka Pass in the High Atlas. The steep mountain hillsides are clustered with fortified villages (Kasbahs). You’ll spend the afternoon exploring the UNESCO world heritage site of Ait Benhaddou, used as a backdrop for shooting more than 20 films and was one of the most important fortress strongholds on the old Salt caravans route where traders brought slaves, gold, ivory and salt from Saharian Africa to Marrakech and beyond. After lunch in the Kasbah you’ll visit the old Pacha Glaoui kasbahin Ouarzazate. This kasbah has an amazing story behind, intrinsically linked to the formation of Morocco as a country in the 20th century. After this we’ll take you on a visit to the Atlas film studios where films such as the Mummy, Gladiator, Lawrence of Arabia etc. have been shooted.  Recommended year  round. 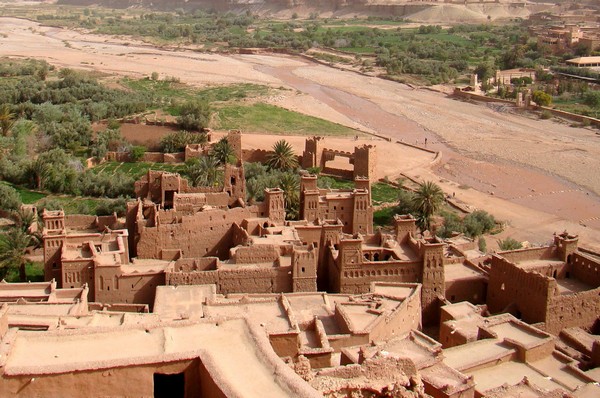